Racism remains a prevalent problem in the United States. But many Americans do not think the responsibility to end racism is exclusive to one race. Rather, the responsibility belongs to both black and white people, according to an exclusive THIRD RAIL WITH OZY-Marist poll. 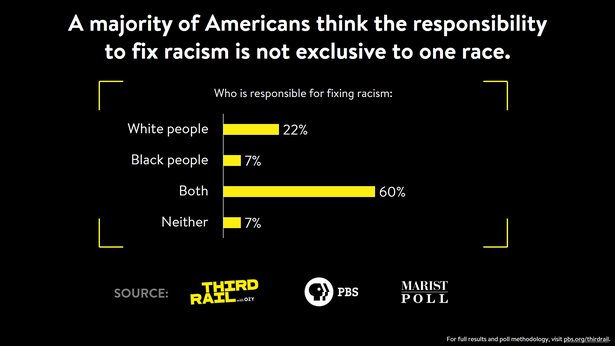 Americans perceive the solution to lie in the hands of everyone, and do not believe black people need to work harder than others to end racism. The disparity in the perception of societal advancement between blacks and whites has not improved. Although half of Americans assert that both black and white people have an equal chance of getting ahead in today’s society, by more than 10-to-one Americans say white people have a better chance than black people of doing so. And, this disparity has changed little over the past 20 years.

The onus to improve race relations is on everyone, according to 60% of Americans. However, 22% of residents believe the responsibility belongs to white people, and 7% say black people need to work on correcting the problem. 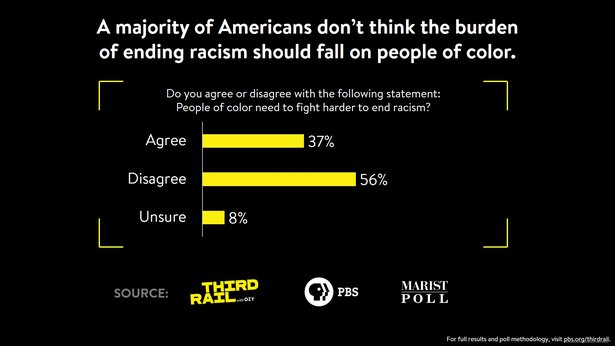 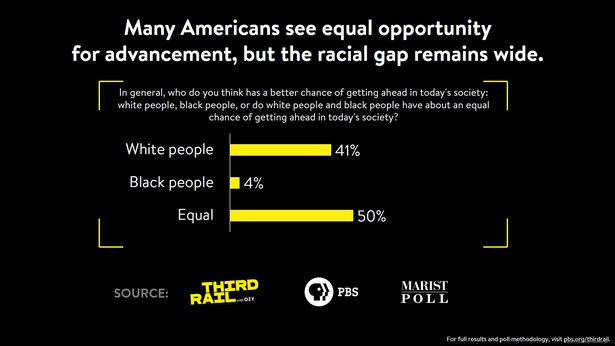 Half of Americans, 50%, think white and black people have an equal chance of getting ahead in today’s society. This is little changed from 46% of U.S. residents who expressed this view in a 1997 CBS News/New York Times survey. Forty-one percent, compared to 43% two decades ago, say white people have a better chance at advancing. Only 4% think black people have the edge in getting ahead, similar to 5% in the 1997 survey.

Again, opinions differ by race. While a majority of white Americans, 54%, say both black and white residents have an equal chance of advancing, nearly two-thirds of African Americans, 65%, and half of Latinos, 50%, report white people have the advantage to move ahead in today’s society.

Americans perceive racism to be a bigger issue in American society than sexism. 54% of U.S. residents consider the nation to be more racist than sexist.  24% think America is more sexist than racist.  One in ten, 10%, say the United States is neither racist nor sexist, and 12% are unsure. Both men, 48%, and women, 61%, think the country is more racist, but interestingly, men, 28%, are more likely than women, 19%, to consider it to be more sexist. 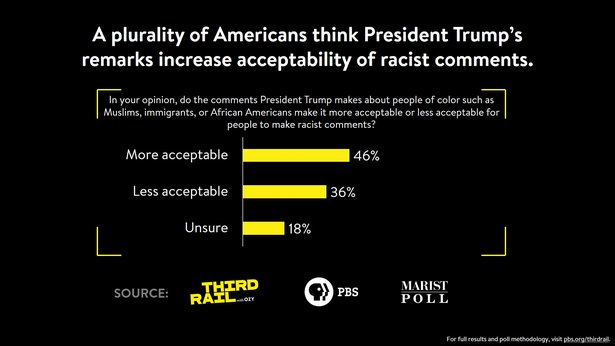 Democrats, 67%, and independents, 49%, are more likely than Republicans, 20%, to believe President Trump’s comments about people of color make it more acceptable to make racist comments. 50% of Republicans say his statements make it less acceptable.

More than half of Americans, 51%, think the anti-immigration movement is simply about securing the country’s borders while 35% believe it is really an anti-people of color movement. 14% are unsure. Again, Democrats, 63%, African Americans, 57%, and Latinos, 46%, are more likely than Republicans, 5%, and white residents, 29%, to think the anti-immigration movement is about race.

This survey of 1,224 adults was conducted September 11th through September 13th, 2017 by The Marist Poll sponsored and funded in partnership with WGBH Boston and OZY Media for the new PBS prime-time, cross-platform debate program Third Rail with OZY. Adults 18 years of age and older residing in the contiguous United States were contacted on landline or mobile numbers and interviewed in English by telephone using live interviewers. Mobile telephone numbers were randomly selected based upon a list of telephone exchanges from throughout the nation from Survey Sampling International. The exchanges were selected to ensure that each region was represented in proportion to its population. Mobile phones are treated as individual devices. After validation of age, personal ownership, and non-business- use of the mobile phone, interviews are typically conducted with the person answering the phone. To increase coverage, this mobile sample was supplemented by respondents reached through random dialing of landline phone numbers from ASDE Survey Sampler, Inc. Within each landline household, a single respondent is selected through a random selection process to increase the representativeness of traditionally under-covered survey populations. Assistance was provided by Luce Research for data collection. The samples were then combined and balanced to reflect the 2013 American Community Survey 1-year estimates for age, gender, income, race, and region. Results are statistically significant within ±2.8 percentage points. There are 1,009 registered voters. The results for this subset are statistically significant within ±3.1 percentage points. The error margin was not adjusted for sample weights and increases for cross-tabulations. See full poll results »