The Devastating Effects of Human Trafficking 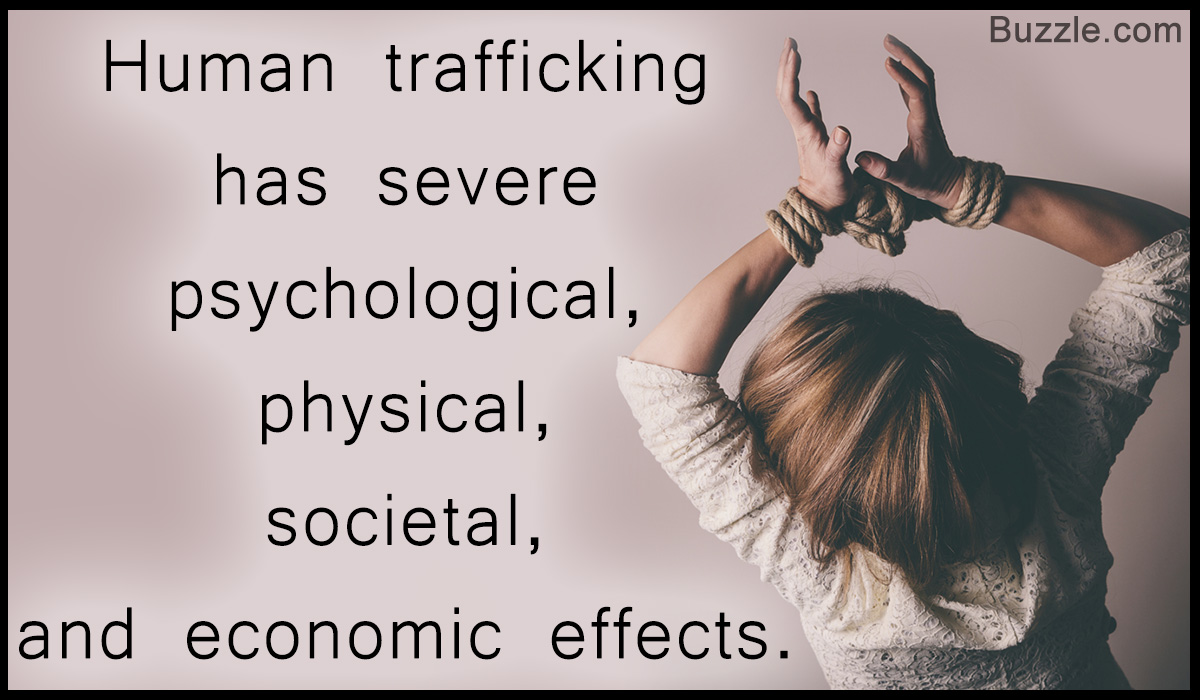 Human trafficking is an ill plaguing our society even in the 21st century. Men, women and children, anyone can become its victim. Not so surprisingly, it happens to be the biggest organized crime in the world, after illegal dealing of drugs and weapons. The effects of human trafficking are numerous and far-reaching.

Human trafficking is the possession or trading of humans for the purpose of engaging them in slavery and prostitution through the means of force and coercion. It is a thriving industry that continues to grow every year. It is feared, that illegal trafficking of humans may soon outdo the illegal drug trade.

Every day there are thousands of people falling victims to advertisements coaxing them with the promise of a better future. In several countries like India, the victims may have been abducted, deceived or even bought from their family members. They are vulnerable due to the lack of education, poor financial standing and absolute immaturity. Trafficking affects at least 7 million lives each year, worldwide. Did you know? The Central Intelligence Agency (CIA) estimates that United States receives an estimated 50,000 people, annually, who are victims of this illegal trade. From the view of the economy, health, psychology and the society, the effects are scary. The traffickers are the only party that gains from this inhuman ordeal, raking up to $10 billion! Statistics published by the United Nations reveal that as of 2006, only 5,808 traffickers were prosecuted and 3,160 were convicted in the United States.

Most traffickers recruit their victims between the ages of 6 to 24, because a young victim will easily succumb to force and give in. They are forced into heavy physical labor in hazardous environment. Many are also taught the use of weapons and are recruited as ‘soldiers’ in armed conflicts. According to statistics by the U.S. Department of State, globally, 2 million children are trafficked into the sex trade each year. The children suffer from lack of self-esteem, emotional disturbance, disorientation, and depression and are scarred for life. They develop deep psychological disorders that they struggle with for the rest of their lives even if they have been rescued. Psychological vulnerability hinders them from having a healthy state of mind in the future. The children are likely to become withdrawn and tend to be suicidal. Any children born to the victims of prostitution are taken away at the time of birth causing further mental agony to the mothers. In fact, the longer the victims have been enslaved, greater will be their traumatic experience.

‘Human Trafficking, Human Misery’, a book written by Alexis Aronowitz, states that an estimated 80% victims of trafficking are sexually exploited, abused or forced into prostitution as most victims are young women and children. Such a victim probably might have to cater to anywhere between 8 to 15 clients in a day. The use of sexual protection is negligible in this industry, leaving the exploited at a high risk of contracting various sexually transmitted diseases and HIV/AIDS that they further pass on to the men and their partners. In some cases, victims are also subjected to substance abuse by being forced to take drugs. Such individuals also have to constantly battle with drug addiction. Improper supply of meals and the lack of nutritious food causes malnourishment in these entrapped victims. Poor living conditions also contribute to the development of various diseases that these victims suffer from in later years. The victims are not given any medical aid to cure these ailments. Those recruited in chemical factories are treated like modern-day slaves and when they succumb to occupational diseases, are quickly replaced by another batch of victims.

The victims may be used as bonded labor in their own country or transported to another country whereupon arrival, their passports and migration documents are taken away from them, leaving them helpless and immobile. Sadly, they are often charged as collaborators of the crimes rather than being seen as victims. They are kept in very poor conditions with sub-standard clothing and food, unhygienic living conditions and no provision for healthcare. They are also often physically and sexually abused by their employers and ‘clients’ for non-compliance with demands. This is a very gruesome picture of the face of our society, hiding behind a wall. Another point to be noted here is that the victims are deprived of education and all human rights. The victims always struggle to gain acceptance in society from the stigma after being rescued. This illegal trafficking often intermingles with other crimes such as smuggling of drugs and ammunition. Corruption is so widespread in our world that the greed for wealth only further encourages trafficking of humans to flourish, with no barriers. In such a scenario, the development of a stable and robust society seems like a distant dream.

According to the International Labor Organization (ILO), human trafficking generates $31.6 billion estimated illicit profit worldwide! As calculated by the CIA, a trafficker earns up to $250,000 per victim of the sex trade in a year. Of this sum, the victim is paid a trivial amount or nothing at all on the pretext of clearing up debts and paying for expenses such as food, clothing and lodging. The victims of slavery are also paid very meager wages for strenuous physical labor which prevents them from fleeing. Availability of such cheap labor hinders employment opportunities and subsequently, reduces per capita income of the nation. The financial repercussions cannot be overlooked. In fact, the network of traffickers has gained immense financial strength which allows such illegal activities to thrive without the fear of law. Illegal immigration is also a threat to national security and a cause of concern for governments worldwide. It gives rise to other ills such as terrorism, poverty, poor standard of living, unemployment, expanding population, wastage of resources, high crime rates, and lack of enforcement of law and order in the country. These factors slow down the economic growth of the nation.

Often, the victims are subjugated by the burden of debts and pressured into forced labor. Debt bondage is a criminal offense in the United States and yet everyday people are being enslaved for it. The wealth gains from trafficking are redirected to legal activities by investing in businesses or funding public affairs in order to launder that money. Along with forced cheap labor, this creates unnecessary competition for genuine businesses. But, above all, the loss of valuable human resources is the most regrettable. It is an undue waste of productivity and development. In fact, it is a disgrace to humanity.

The Devastating Effects of Human Trafficking

allaboutianthe open online profile for all