Texas Republican Gov. Greg Abbott on Tuesday signed one of his party’s top legislative priorities into law: a bill aimed at stopping teachers from talking about racism and any current events that may be contentious.

The legislation, supported by virtually every GOP state legislator, states that social studies teachers in public K-12 schools “may not be compelled” to talk about current events or public policy or social issues considered controversial. If they do talk about such things, they are required to present the issue “without giving deference to any one perspective.”

The law specifies all the things that social studies teachers aren’t allowed to talk about.

They can’t make it part of a course to talk about the concept that “one race or sex is inherently superior to another race or sex.”

They can’t make it part of a course to talk about the concept that someone could “be discriminated against or receive adverse treatment solely or partly because of the individual’s race.”

They can’t make it part of a course to talk about the concept that “an individual’s moral character, standing, or worth is necessarily determined by the individual’s race or sex.”

They can’t make it part of a course to talk about the concept that “an individual should feel discomfort, guilt, anguish, or any other form of psychological distress” based on their race or sex.

They can’t make it part of a course to talk about the concept that “meritocracy or traits such as a hard work ethic are racist or sexist or were created by members of a particular race to oppress members of another race.”

They can’t make it part of a course to talk about the concept that “the advent of slavery” in the United States was central to the founding of the country.

They can’t make it part of a course to talk about the concept that “slavery and racism are anything other than deviations from, betrayals of, or failures to live up to” the country’s founding principles.

And they definitely can’t make it part of a course to talk about The 1619 Project, an award-winning project launched by The New York Times Magazine that puts the consequences of slavery and the contributions of Black Americans at the center of America’s national narrative. 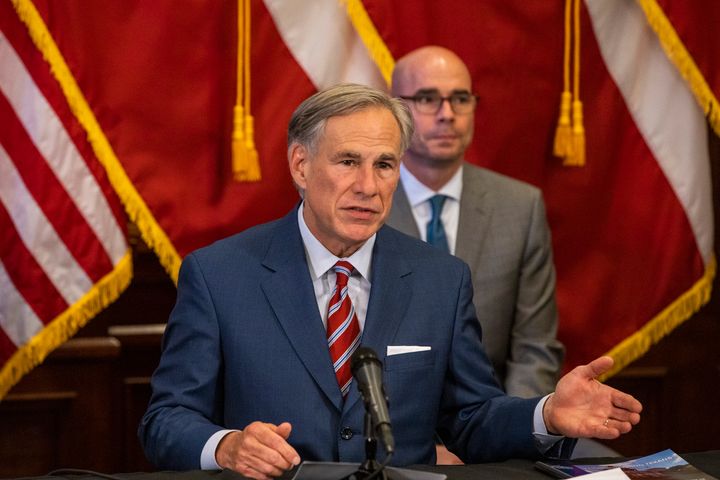 Texas Republican Gov. Greg Abbott signed one of his top legislative priorities into law: a bill to stop teachers from talking about racism and current events.

The Texas law doesn’t explicitly use the word “ban” for conversations about racism. But it might as well, according to state Democratic Rep. James Talarico, a vocal critic of the bill.

“The bill is written in kind of a clever way,” Talarico, a former middle school teacher who now represents a district north of Austin, told HuffPost last month. “You can talk about race in the classroom, but you can’t talk about privilege. … It doesn’t outright ban talking about race, but the idea is to put in landmines so any conversation about race in the classroom would be impossible.”

“The idea is to whitewash American history of any legacy of racism,” he added.

The bill also states that teachers don’t have to take part in any professional training ― like cultural proficiency and equity training ― or orientation that addresses “any form of race or sex stereotyping or blame on the basis of race or sex.”

Here’s a copy of the final version of the bill that was just signed into law.

The Texas measure is part of a nationwide effort by conservative Republicans to enact laws that prevent the teaching of “critical race theory,” an academic discipline centered on the idea that racism is an everyday experience for most people of color, that this has shaped the country’s legal and social systems, and that white people ― the segment of society with the most power ― have no interest in changing this reality because it benefits them.

Texas’ law goes a bit further than those of other states by preventing students from participating in any public policy advocacy as part of a civics or social studies class. Its language is written so broadly that it applies to students engaging in the most basic of civic activities, such as communicating with their own elected officials about a particular topic.

Talarico nearly killed the bill late last month, days before the state’s legislative session ended. He pointed out on the House floor that the Senate had added unrelated amendments to the bill, which is not allowed. He was right ― and the bill was abruptly sent back to the Senate, where it normally wouldn’t have had enough time to be fixed.

But Republican Lt. Gov. Dan Patrick, who runs the state Senate, bypassed rules to get the bill through. He possibly violated the Texas Constitution in the process, and he also violated Senate rules that prohibit passing a House bill after the 135th day of a legislative session. Patrick pushed through the bill on the 137th day.

“We will certainly see a legal challenge to this bill. The question is whether it is an institutional challenge, a process challenge, or a free speech challenge.”

– Brandon Rottinghaus, a political science professor at the University of Houston

The law is likely headed to court for a number of reasons, said Brandon Rottinghaus, the Pauline Yelderman Endowed Chair of the department of political science at the University of Houston.

“We will certainly see a legal challenge to this bill,” he said. “The question is whether it is an institutional challenge, a process challenge, or a free speech challenge.”

Rottinghaus speculated that although Republicans may have violated the state’s constitution and Senate rules, it’s hard to see a Texas court undoing legislation that was passed by both chambers due to a relatively modest rule violation.

Cara Santucci, a spokesperson for the Texas House Democratic Caucus, said Democrats have looked into possible constitutional violations in the way the bill was passed and don’t see much room for legal action, either.

“My understanding from some of the best rules experts in the building is that what happened probably was a violation of the Constitution, but it’s one that reasonable people could disagree on and argue against. It’s a bit gray,” Santucci said. “It’s unlikely it will lead to a successful lawsuit.”

That leaves a free speech legal challenge with perhaps the most viability.

The American Civil Liberties Union of Texas did not respond to a request for comment on whether it is considering a free speech lawsuit over the law.

A silver lining for Democrats is that the House-passed version of the bill ― which included amendments from Democrats ― is what became law. Their amendments require educators to teach the history of white supremacy and the stories of key historical figures such as Frederick Douglass, Martin Luther King Jr., Cesar Chavez and Dolores Huerta. They also attached amendments to the bill requiring teachers to talk about the Chicano movement, the labor movement and the feminist movement.

It is not entirely clear how these subjects will be taught, though, if certain discussions about racism aren’t allowed.

Talarico said Democrats should feel proud that they were at least able to make the final legislation a little less bad.

“We killed the racist version of HB 3979 and forced Dan Patrick to pass the House version that requires Texas students learn ‘the history of white supremacy and the ways in which it is morally wrong,’” he tweeted last week.

allaboutianthe open online profile for all