The trained business administrator Michael Ballweg founded the Querdenker (lateral thinkers) movement in the city of Stuttgart in 2020. Organizing it has become his full-time job, as the movement has spread.

The Querdenker include pandemic skeptics, anti-vaxxers and anti-lockdown protesters. They claim the COVID-19 pandemic and the federal and regional laws aimed at halting the spread of the virus, infringe on citizens’ liberties.

Now, protesters regularly take to the streets in cities across the country.Often the demonstrations turn violent.

But images of clashes between demonstrators and police do not fit the image the Querdenker like to create for themselves. Michael Ballweg and his followers are always quick to emphasize their peacefulness and loyalty to the German Constitution. 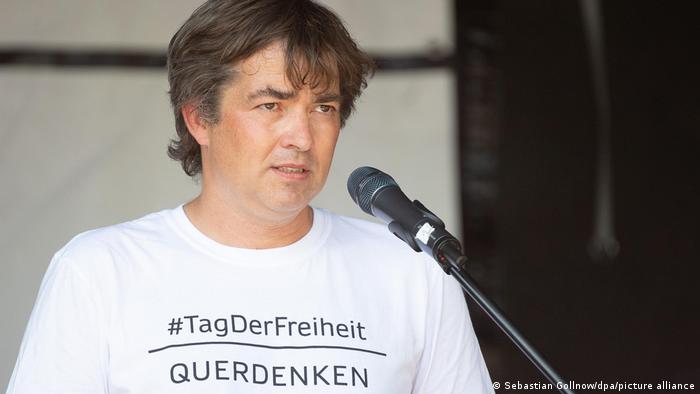 Dancing and singing are part of the standard repertoire at rallies. But that’s only one facet because right-wing extremists are also in regular attendance. And nobody walking alongside them seems to care.

Democracy researcher at the University of Marburg, Reiner Becker, recognizes a recurring pattern: “It is every individual’s decision to take part in such a demonstration,” he told DW. In turn, participants are therefore responsible for their actions. They know that it is a strategy to overwhelm police with the “sheer mass” of demonstrators and not to adhere to the rules imposed by the courts.

This is exactly what happened in mid-March in Kassel. More than three times the permitted 6,000 participants marched through the streets. Most of them didn’t follow social distancing rules of 1.5 meters, nor did they wear face masks. Counter-demonstrators were also on the move. As the situation grew increasingly confusing and violent. Police were using batons, pepper spray, and water cannon. Photos and video footage of police officers beating demonstrators continue to circulate online.

Christopher Vogel works in the mobile advisory team against racism and far-right extremism in Kassel and has observed the demo on the ground. He considers general criticism of officials’ behavior to be unfair, he told DW. The situation was confusing, he said: There were clashes between right- and left-wing radicals, but in between were families with young children and some demonstrators put their children “in the front row, as protective shields so to speak,” Vogel recalled. His conclusion: “It was no longer manageable.” 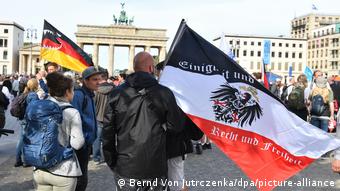 The substance of the movement is “extremely thin,” he said. In principle, Querdenker are only concerned with their individual freedom and have no further socio-political demands.

“They just want to get back to normal and have some peace and quiet from the state,” Vogel said. If COVID-19 disappears from the front pages, a large part will say goodbye to political engagement.

This assessment fits in with the results of a study published in December 2020 by sociologists at the University of Basel, Oliver Nachtwey. He and his team asked more than 1,100 “Querdenker” about their motives and attitudes. Almost half of them had never participated in a demonstration before the coronavirus protests.

“In terms of demographics, it’s a relatively old and relatively academic movement,” is one finding. Less than 10% are younger than 30, and the average age is almost 50.

Almost two-thirds of those surveyed have at least a high school diploma, more than half of them have finished their university education, and 67% consider themselves to be middle class.

23% of the surveyed Querdenker said they had cast their ballots for the Greens in Germany’s 2017 federal election. Eighteen percent voted for the Left party and 15% for the far-right Alternative for Germany (AfD). But, that was long before the pandemic. In September’s elections, the AfD could almost double votes in Querdenker circles to 27%, while the Greens and conservative CDU/CSU would not get any support at all. 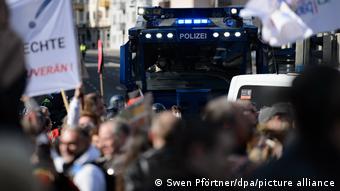 According to the Basel study, the vast majority of Querdenker, say they’ll vote for little-known splinter parties in September, such as the Basic Democratic Party of Germany, which was only founded in July 2020. On that party’s homepage, there are statements like: “Anyone who claims that freedom prevails in our country is lying. Because freedom does not prevail.”

This perceived lack of freedom appeals to the Querdenker: 80% of those polled said they agree with the statement that one can no longer express their opinion without getting into trouble. Around 75% believe the media and politics are in cahoots, and that the government is hiding the truth.

The Querdenker movement is characterized by a strong sense of alienation, the study showed, not only from state institutions and the political system and the established media.

But the Querdenker followers were also found to be not “downright xenophobic or Islamophobic” and in some cases “rather anti-authoritarian and inclined towards anthroposophy.”

This self-assessment seems to fit in with the images of Querdenker demos. Dancing, drumming, singing people, on the one hand, and far-right extremists bearing the imperial Reichskrieg flag and anti-Semitic slogans on the other.

Provocation with the Star of David

The protesters are a mixed bag of people: Some look like hippies from the 1960s and 70s. Others seek to provoke by wearing a yellow star, similar to those which Jews were forced to wear under the Nazis. Instead of the word “Jude” (Jew) their stars bear the word “ungeimpft” (not vaccinated.) The stars are meant to highlight the alleged stigmatization by the system the protesters reject.

The Querdenker movement has been officially under surveillance by domestic intelligence in its home state of Baden-Württemberg since December. “Extremist, ideological conspiracy and anti-Semitic content is deliberately mixed up with legitimate criticism of the state measures that aim to contain the pandemic,” a statement said at the time.

Almost four months on, authorities say their decision has been confirmed. Additional insights into regional Querdenker offshoots were obtained, “which give a more comprehensive picture of the initiative’s network,” a spokesperson for the regional intelligence agency told DW on request.

Some of the gathered data show the interweaving of leading Querdenker figures with far-right Reichsbürger and Selbstverwalter groups.

How far the contact goes could soon be observed again at the next large-scale demonstration, planned for April 3 in Stuttgart. Unless the gathering is prohibited. So far, however, such requests have almost always failed in court.

This article was translated from German.

While you’re here: Every Tuesday, DW editors round-up what is happening in German politics and society, with an eye toward understanding this year’s elections and beyond. You can sign up here for the weekly email newsletter Berlin Briefing, to stay on top of developments as Germany enters the post-Merkel era.

Be Careful When Deleting Conversations in Messages

Read more about "Be Careful When Deleting Conversations in Messages"