Why COVID-19 Makes People Lose Their Sense of Smell

One morning a few weeks ago I was chatting with my friend Horacio, a mathematician in the New York City area. He told me he’d lost his sense of smell for a couple of weeks in April. He was cooking for Passover and couldn’t even smell the gefilte fish. He didn’t think much of it and didn’t connect it to the fact that he had been slightly ill for a few days. I suggested that he get tested for antibodies of SARS-CoV-2, the virus that causes COVID-19; and that he take an online survey for smell and taste symptoms associated with recent respiratory illness (more on that shortly). It turned out Horacio had antibodies, so he signed up to donate plasma. This was a lucky diagnosis aided by timing and geography; smell and taste symptoms associated specifically with COVID-19 seem to appear as sudden hyposmia or anosmia (decrease or loss of smell), but just because you can’t smell doesn’t mean you have the virus.

In some people, anosmia is the first or an early symptom, and for some the only symptom, of COVID-19. It is therefore tempting to look to anosmia as diagnostic. Indeed, right now, with the novel coronavirus raging across the country and world, a sudden loss of smell, especially in a city with large infection rates, is more likely associated with COVID-19 than anything else. Olfactory dysfunction is now listed as one of the key symptoms of the disease, and physicians are offered guidance for testing olfactory function.

However, smell loss is an important component of many conditions, from a simple cold, to a sinus infection, to early stage Alzheimer’s and Parkinson’s diseases, or simply aging. Hyposmia and anosmia are quite common, 12.4 percent of Americans over the age of 40 have some hyposmia and 3 percent of Americans are anosmic across a wide range of ages. While anosmia might be a helpful symptom to suspect infection in the midst of a pandemic, and indicate a test, it’s not by itself diagnostic of COVID-19. It is also tempting to use the loss of smell to predict how a patient will fare. A new study from researchers at the University of California, San Diego, tested a relatively small cohort of patients and suggests that smell loss may predict less severe disease less likely to require hospitalization. However, the small number of subjects who were hospitalized and for whom smell data were collected in that study suggests that little can yet be concluded regarding prognosis from smell loss alone.

On a more positive note, the sudden loss of smell in COVID-19 may help us understand how SARS-CoV-2 works. In late February, chemosensory scientists began discussing reported COVID-19 associated anosmia on twitter and other social media, and formed an international group called Global Chemosensory Research Consortium. This fast and extremely collaborative effort resulted in the creation of an online survey hosted at Penn State and began collecting data globally. To date, there are over 30,000 responses to the survey in 31 languages. The results will allow researchers in the consortium to ask whether there is significant decrease in smell, taste, or nasal/oral chemesthetic (chemical sensitivity of mouth, nose and skin) sensation associated with COVID-19 and other respiratory illnesses.

The first paper from a planned data pull 11 days after the survey was posted show an average loss of close to 80 percent of normal smell function, 69 percent of normal taste function, and 39 percent of normal chemesthetic function from COVID-19. The next paper will address the differences between chemosensory symptoms of COVID-19 compared to other respiratory illnesses. This has been a tremendous effort in international open science, with preregistered hypotheses, openly available analysis code and data, and a large team science approach to collecting and analyzing crowd-sourced data, in a slack group of over 700 scientists. Several other crowd-sourced studies are in the early and late planning phases and will be released in the near future.

Why would we need surveys to tell us that anosmia is a symptom when worldwide reports of anosmia in the news led scientists to start these projects? The rate of infection of COVID-19 across the globe means that there are many times more people infected with a respiratory virus at the same time than is normally the case. Respiratory viruses can often lead to temporary or permanent anosmia and dysgeusia (distortions in taste). It was possible that the sheer number of infected people led us to notice the usual level of anosmia and to consider this as extraordinary.

It does appear, however, from a few early studies, that the anosmia seen with COVID-19 is present in 30–98 percent of infected people seen in hospitals, far more than occurs with other known respiratory infections. (Testing smell function is notoriously difficult to standardize across locations, cultures and scenarios, so this leads to a high variance in the estimated prevalence of hyposmia.) Another international crowdsourced study asked people to test themselves with household items and report the intensity of the odors of, for example, peanut butter, vanilla and toothpaste. A recent study looked at the subset of those data from Sweden and reported that the prevalence of hyposmia tracks with the estimated population infection rate. These studies indicate that there is something special about the virus that attacks the sense of smell in particular, which may help us understand how the virus works.

How does the virus attack the sense of smell? Research is coming out fast, and we have access to early reports, often via preprint servers that have not yet passed the peer review process and should be interpreted with caution (as is the case with many of the studies discussed above). Mechanistic studies indicate what factors are relevant to hyposmia and anosmia. Most scientists agree that SARS-CoV-2, like the earlier known SARS-CoV, uses the angiotensin-converting enzyme 2 (ACE2) receptor to gain entry to cells via binding with spike protein. SARS-CoV-2 additionally appears to need TMPRSS2, a protease, to help prime the spike protein in the process of gaining entry to cells and a few other proteins. This means that cells must express all of these proteins for the virus to be able to infiltrate them and hijack their machinery to replicate.

ACE2 and TMPRSS2 are expressed in many types of cells, and quite abundantly in the nose, throat, and upper bronchial airways. In the nose, expression is seen in both the respiratory epithelium (RE) and the olfactory sensory epithelium (OSE) but in much higher levels in the OSE. In the OSE, the proteins are expressed in the sustentacular (supporting) and olfactory stem cells as well as in the Bowman’s (mucus) glands and microvillar cells in lower levels. All of these cells help maintain the health of the sensory neurons and the mucus layer so that odors can properly activate the neurons. So far, it appears that olfactory sensory neurons themselves do not have the right expression patterns to bind SARS-CoV-2, which means that the virus may not directly invade these neurons that synapse directly in cortex in the olfactory bulbs. 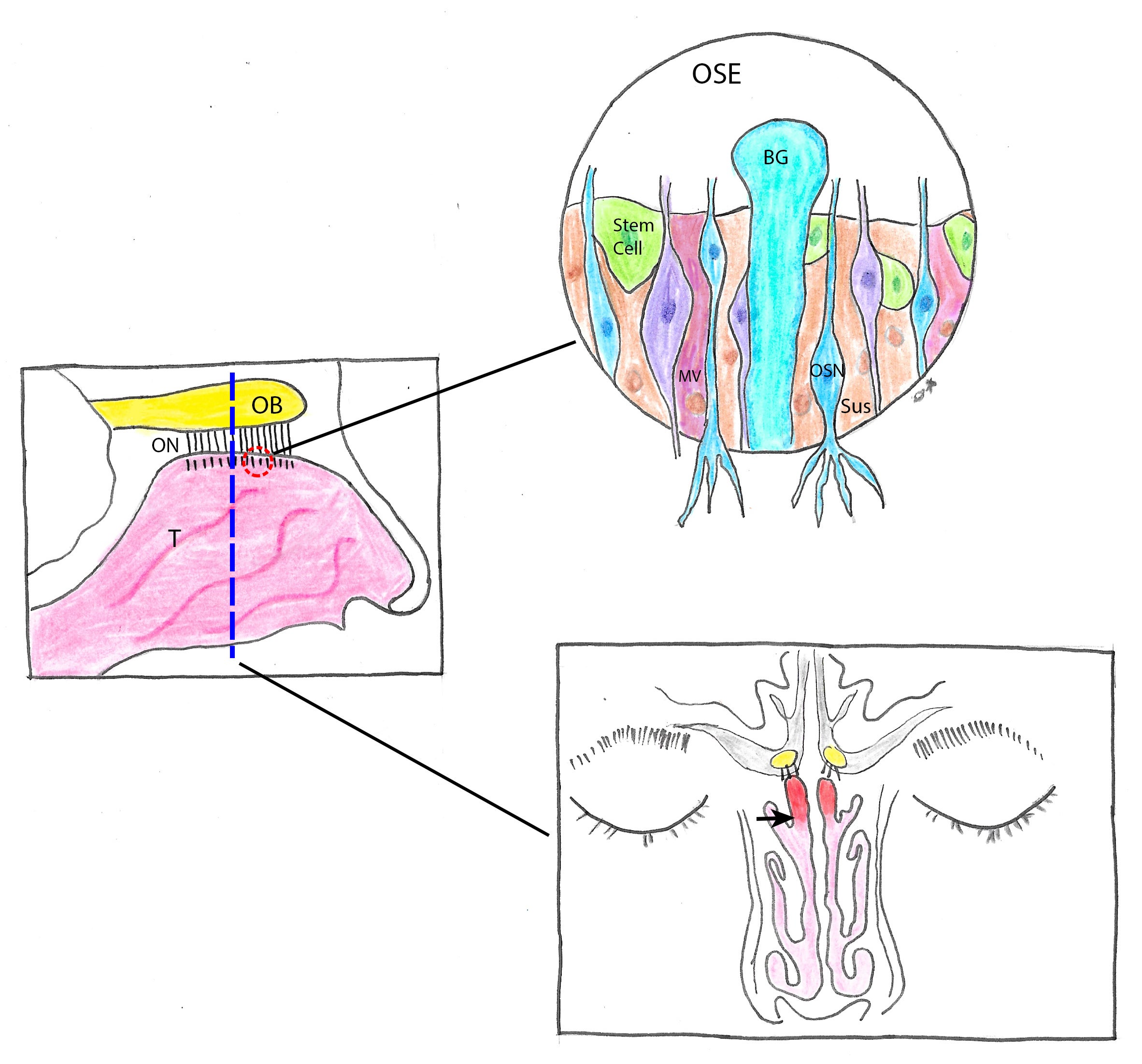 Human upper nasal cavity on the left, showing the interface between the olfactory sensory epithelium (OSE; circle cut out) and the olfactory bulb (OB) in the brain. The olfactory nerve (ON) carries signals from the OSE to the OB. Turbinate bones (T) in the nasal cavity serve to distribute air along the nasal passageways. In the OSE, there are several types of cells in addition to the olfactory sensory neurons (OSNs) whose processes make up the olfactory nerve. Sustentacular cells (Sus) likely allow greatest entry of SARS-CoV-2, but microvillar (MV) and stem cells also appear to have the appropriate receptors to permit entry of the virus, as do the Bowman’s glands (BG). Damage to any of these cells could affect proper functioning of the OSNs or even kill them in small or large numbers. The frontal cutaway view in the lower rectangle shows a small area of the OSE (darker red) that could be isolated by inflammation (arrow) without perceptibly interrupting airflow in the nose. Credit: Cosmo Kay

There is evidence that the virus can migrate into the central nervous system via the nose and olfactory bulbs as well as by other routes without invading the sensory neurons. However, the expression patterns of ACE2 and TMPRSS2 and the sudden onset and relatively fast recovery suggest that COVID-19 anosmia is not caused by damage to the central nervous system but rather by the loss of smell information before it gets to the brain. If the symptoms were centrally driven, we would expect a slower process and recovery as well as a more complex range of symptoms, including possibly parosmia or phantosmia (distorted or hallucinated smells), which have not been reported.

Inflammation in the sensory epithelium could restrict airflow to the relatively small olfactory cleft, high up in the nose, without causing the feeling of a stuffy nose or interruption of breathing, as demonstrated in a published case report. Damage to the sustentacular cells in the SE could also affect functioning of the sensory neurons in many ways (metabolic, structural, inflammatory), so that even if odors can get to the neurons, they may not be able to transmit signals.

The relatively fast recovery of olfactory function in most patients also lends support to a peripheral cause that does not kill the olfactory sensory neurons. Although these neurons do regenerate throughout life, they do not do so suddenly but rather in a process that takes 30 days or more in which sensation would gradually improve. (Some people who became anosmic as a result of the virus have not yet recovered their sense of smell. This may point to widespread death of sensory neurons or central damage in some individuals.) Because olfactory symptoms can occur very early in the disease, before respiratory symptoms, this may make understanding the virus’ entry into cells in the olfactory sensory epithelium particularly important for understanding infection.

There are still many open questions to this mystery, but unprecedented international collaborations and sharing of early data will undoubtedly move research forward faster than usual. The olfactory link is an important clue as to the virus’ mechanisms and has leveraged many decades of basic research from chemosensory scientists that has gone on in relative obscurity and put a spotlight on anosmia as a sensory disability.

Read more about the coronavirus outbreak from Scientific American here. And read coverage from our international network of magazines here.

Why COVID-19 Makes People Lose Their Sense of Smell