“I was just starting with my new job, but the pandemic triggered much anxiety causing me to abandon my apartment in Pasig and move back to our family home in Mabalacat, Pampanga.”

This was Mano Dela Cruz’s quick response to the initial round of lockdowns that swept the nation in March 2020.

Anxiety crept up on Mano, who was diagnosed with Bipolar Disorder Type II with Attention Deficit Hyperactivity Disorder and Obsessive-Compulsive Personality Disorder traits. The 30-year-old writer is just one of many Filipinos experiencing the mental health fallout of the pandemic.

Covid-19 infections in the Philippines have reached 1,149,925 cases as of May 17. The pandemic is unfolding simultaneously with the growing number of Filipinos suffering from mental health issues. At least 3.6 million Filipinos suffer from mental, neurological, and substance use disorders, according to Frances Prescila Cuevas, head of the National Mental Health Program under the Department of Health.

As the situation overwhelmed him, Mano had to let go of his full-time job. “At the start of the year, I thought I had my life all together, but this pandemic caused great mental stress on me, disrupting my routine and cutting my source of income,” he said.

Mano has also found it difficult to stay on track with his medications. “I don’t have insurance, and I do not save much due to my medical expenses and psychiatric consultations. On a monthly average, my meds cost about P2,800. With my PWD (person with disability) card, I get to avail myself of the 20% discount, but it’s still expensive. On top of this, I pay for psychiatric consultations costing P1,500 per session. During the pandemic, the rate increased to P2,500 per session lasting only 30 minutes due to health and safety protocols.”

The pandemic has resulted in substantial job losses as some businesses shut down, while the rest of the workforce adjusted to the new norm of working from home.

Ryan Baldonado, 30, works as an assistant human resource manager in a business process outsourcing company. The pressure from work, coupled with stress and anxiety amid the community quarantine, took a toll on his mental health.

Before the pandemic, Ryan said he usually slept for 30 hours straight, often felt under the weather, and at times subjected himself to self-harm. “Although the symptoms of depression have been manifesting in me through the years, due to financial concerns, I haven’t been clinically diagnosed. I’ve been trying my best to be functional since I’m the eldest, and a lot is expected from me,” he said.

As extended lockdowns put further strain on his mental health, Ryan mustered the courage to try his company’s online employee counseling service. “The free online therapy with a psychologist lasted for six months, and it helped me address those issues interfering with my productivity at work,” he said.

Ryan said such comments pressured him to act normally. But having a degree in psychology did not make one mentally bulletproof, and he was reminded of this every time he engaged in self-harming behavior and suicidal thoughts, he said.

“Having a degree in psychology doesn’t save you from depression,” he said.

Depression and anxiety are on the rise among millennials as they face the pressure to perform and be functional amid pandemic fatigue.

Karla Longjas, 27, is a freelance artist who was initially diagnosed with major depression in 2017. She could go a long time without eating, but not without smoking or drinking. At times, she would cut herself as a way to release suppressed emotions. Karla’s mental health condition caused her to get hospitalized twice, and she was diagnosed with Borderline Personality Disorder in 2019.

“One of the essentials I had to secure during the onset of the lockdown was my medication, for fear of running out,” Karla shared.

With her family’s support, Karla can afford mental health care.

She has been spending an average of P10,000 a month on medication and professional fees for a psychologist and a psychiatrist. “The frequency of therapy depends on one’s needs, and, at times, it involves two to three sessions a month,” she added.

Amid the restrictions of the pandemic, Karla said her mental health was getting out of hand. “I feel like things are getting even crazier, and I still resort to online therapy with my psychiatrist,” she said.

“I’ve been under medication for almost four years now with various psychologists and psychiatrists. I’m already tired of constantly searching and learning about my condition. Knowing that this mental health illness doesn’t get cured but only gets manageable is wearing me out,” she added.

In the face of renewed lockdowns, rising cases of anxiety, depression, and suicide, among others, are only bound to spark increased demand for mental health services. 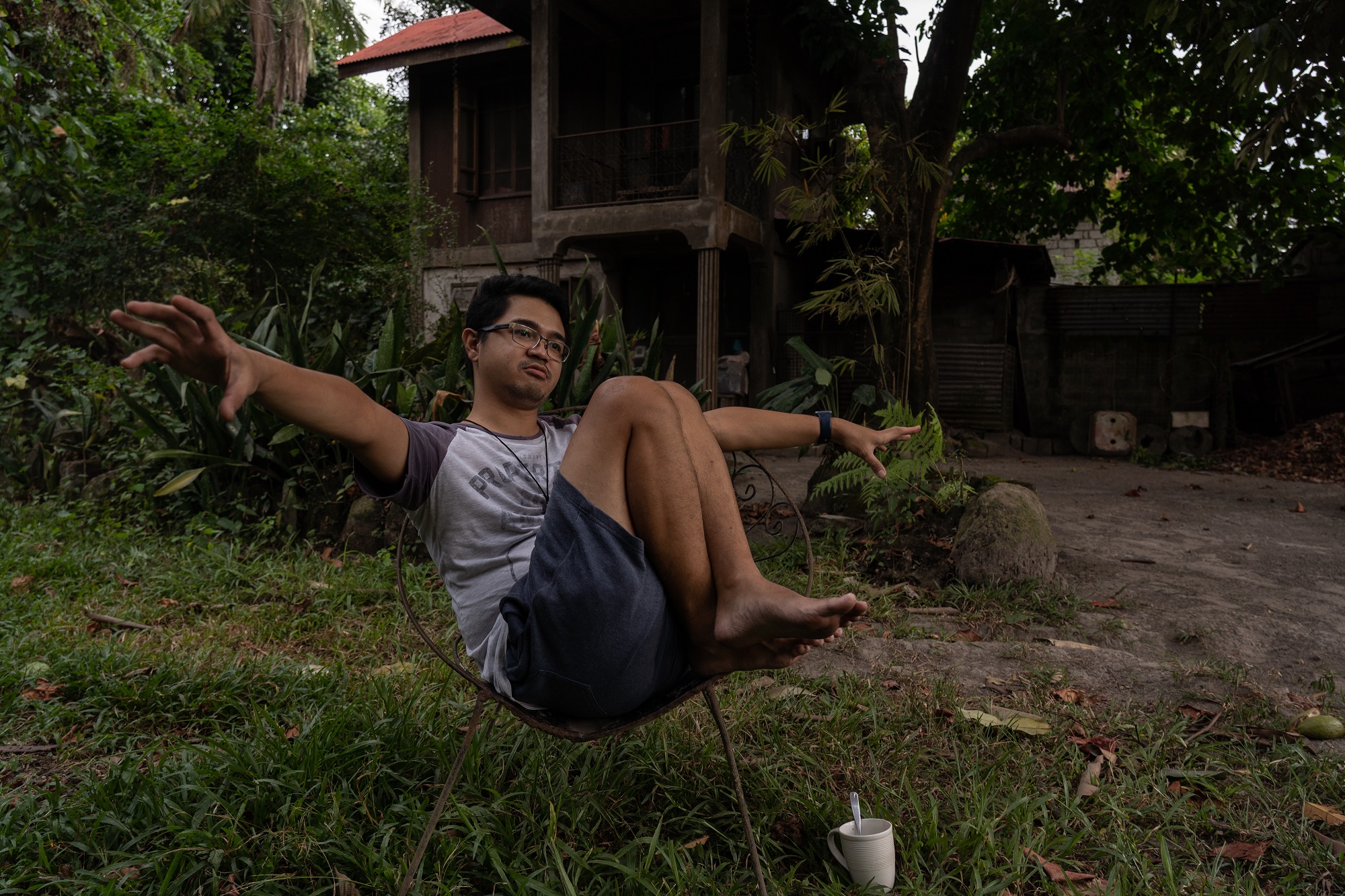 Writer Mano Dela Cruz, 30, is shown sharing stories of his manic episodes, describing the experience as being on ‘top of the world.’ Individuals diagnosed with Bipolar Disorder Type II suffer more often from episodes of depression than hypomania. Depressive periods, ‘the lows,’ translate to feelings of guilt, loss of pleasure, low energy, and thoughts of suicide. 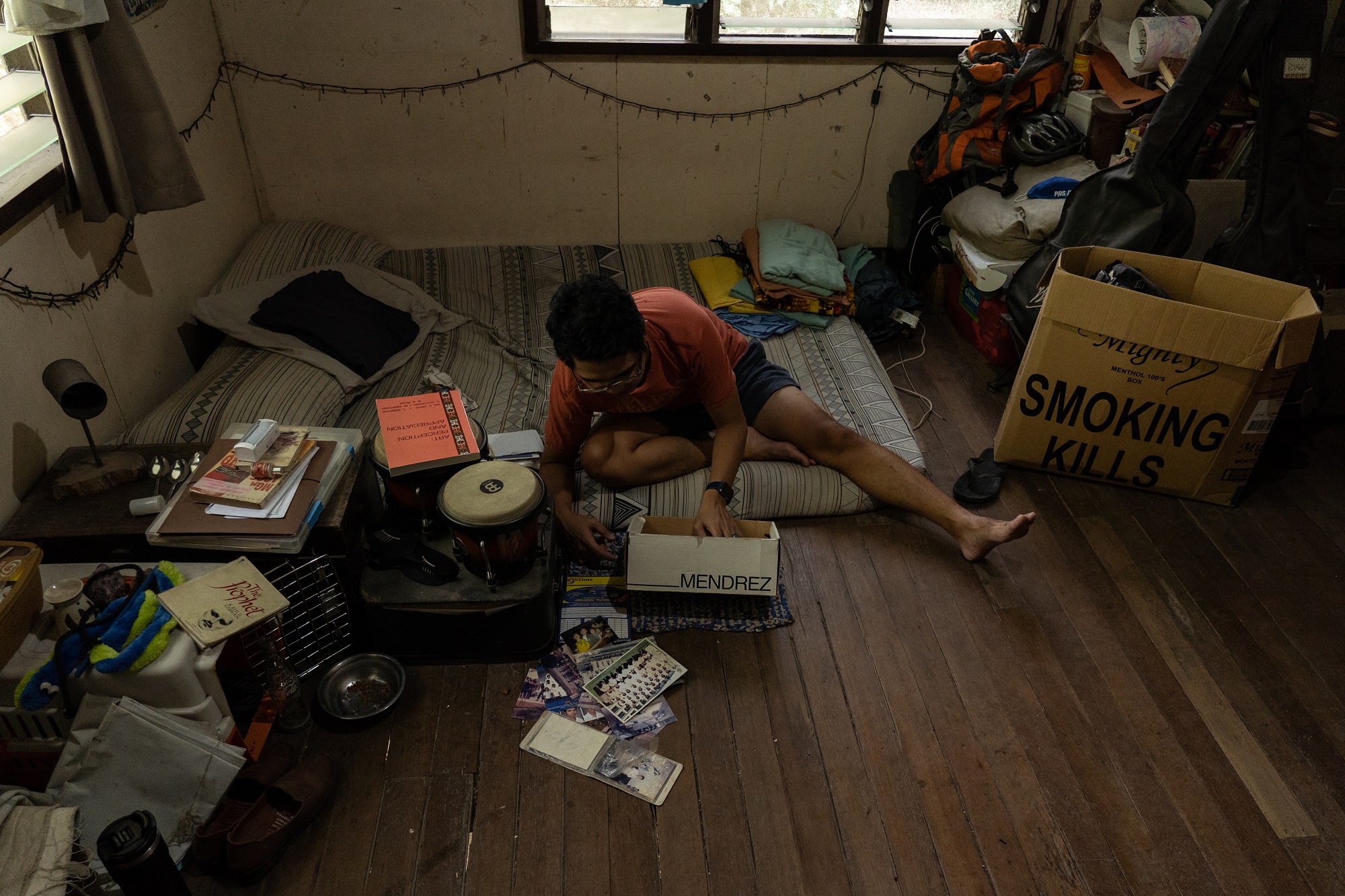 Mano says the mess in his room indicates his disposition, whether he’s in a manic or depressive state. “I know that I’m not stable when I look at my room and it’s too cluttered. There are days when I don’t have the energy to clean up and even take a bath,” he says. 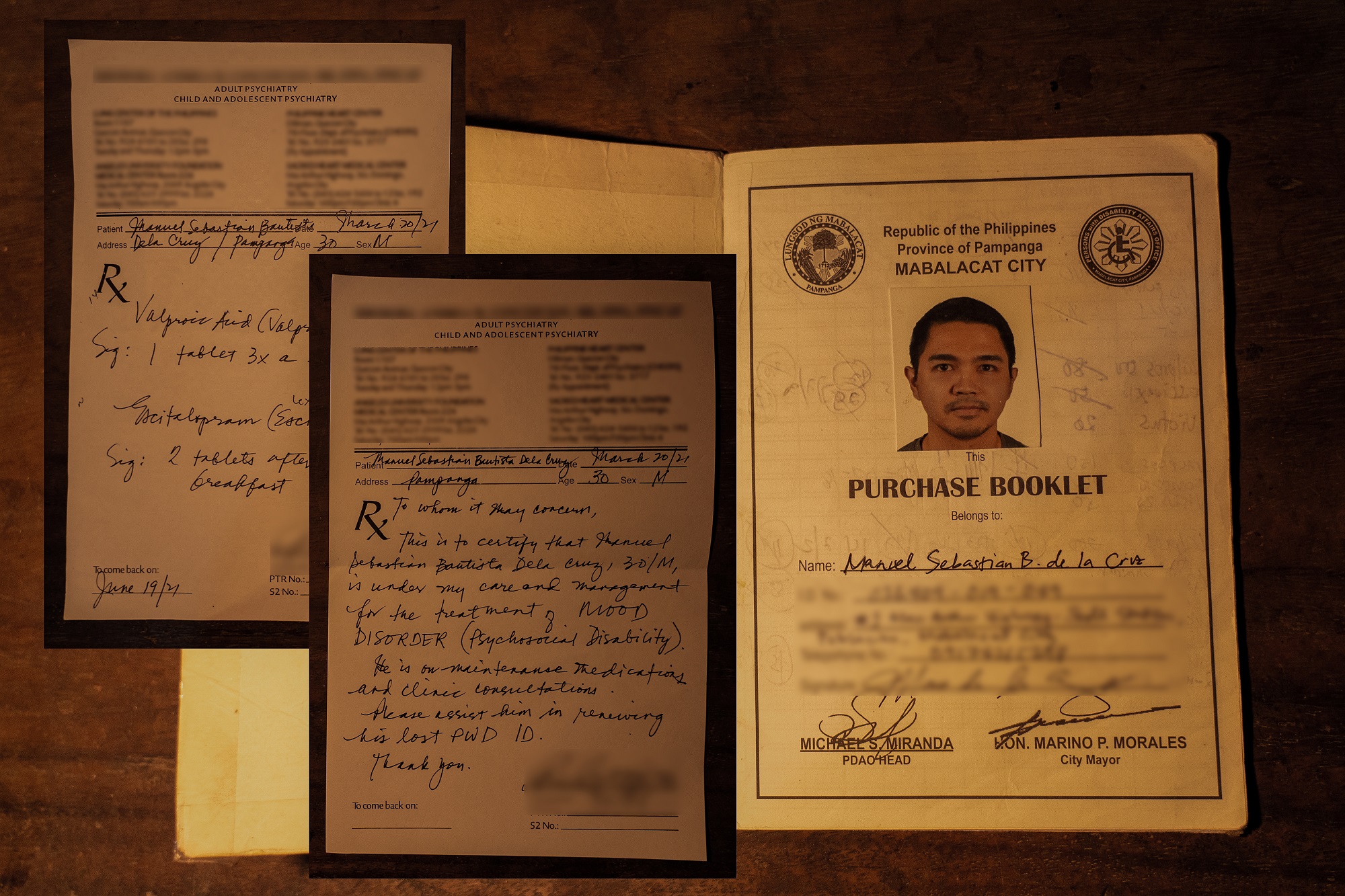 Mano was diagnosed with Bipolar Disorder Type II in 2016, when he was in his mid-20s. His condition comes with Attention Deficit Hyperactivity Disorder and Obsessive-Compulsive Personality Disorder traits, requiring lifelong treatment with antipsychotics and mood stabilizers such as antidepressants. 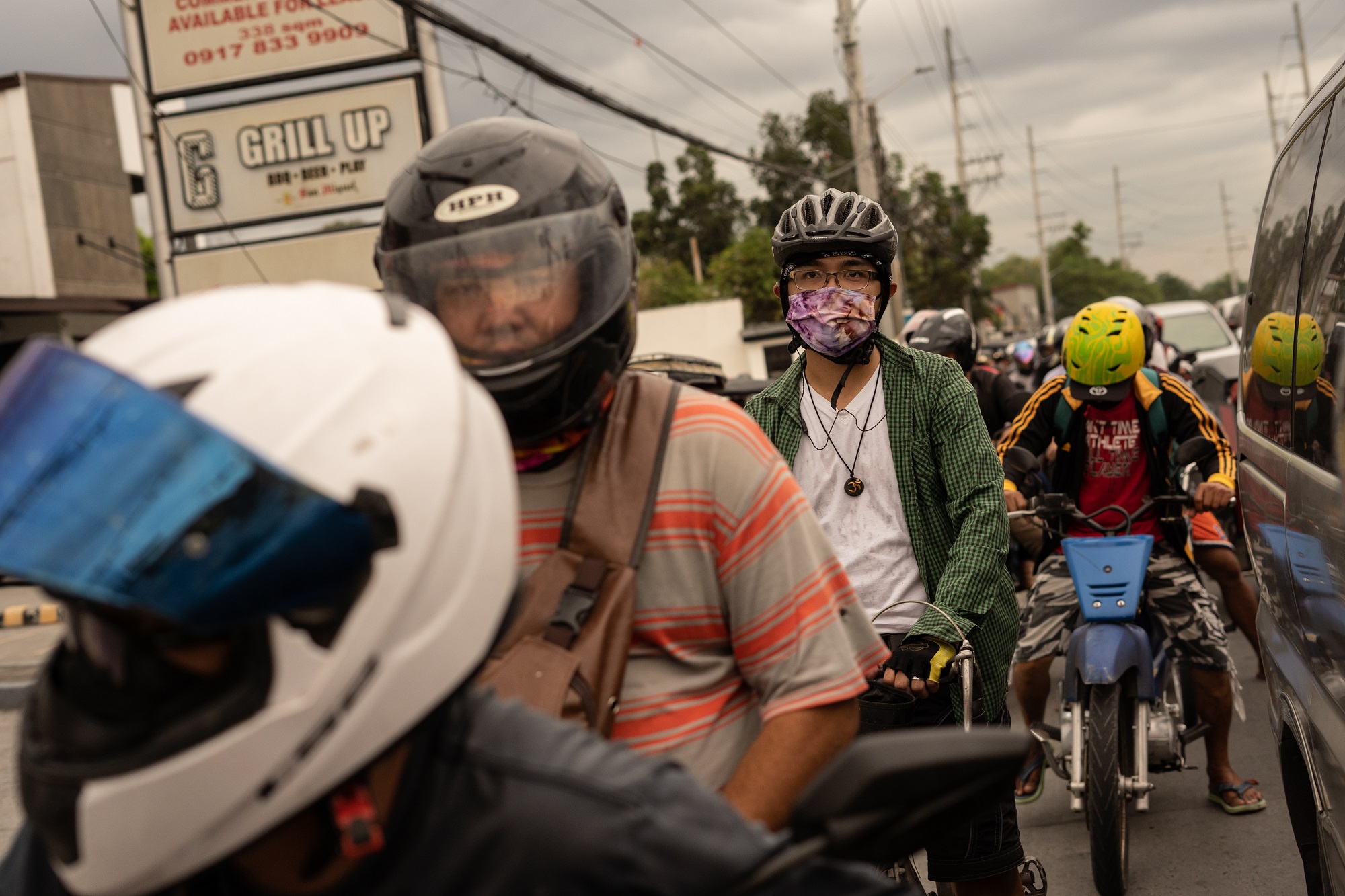 Mano resorts to biking as a form of exercise and to release feel-good endorphins, which helps combat depression, according to his psychiatrist. 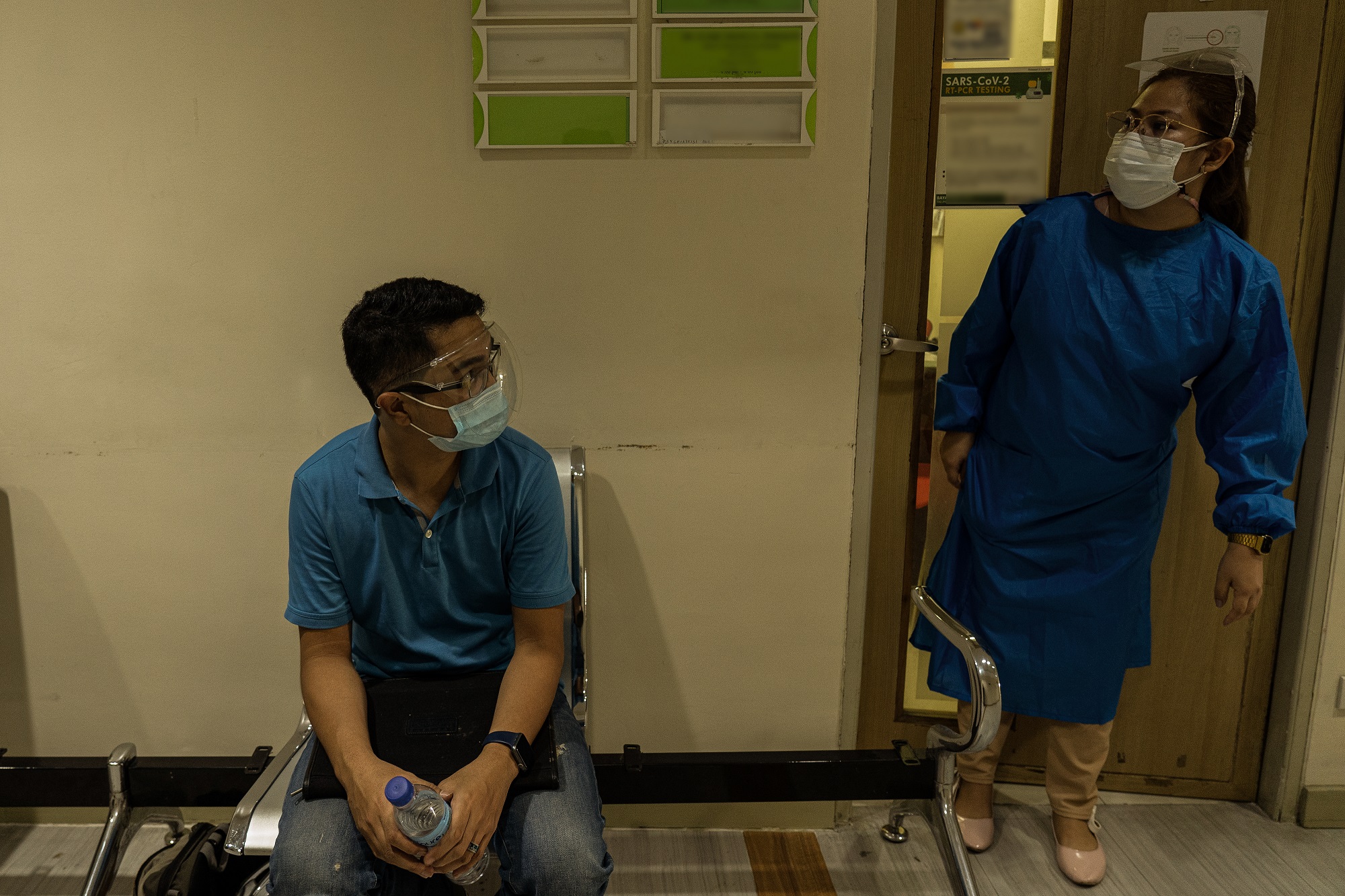 Mano waits for his psychiatric consultation at a hospital in Angeles, Pampanga. 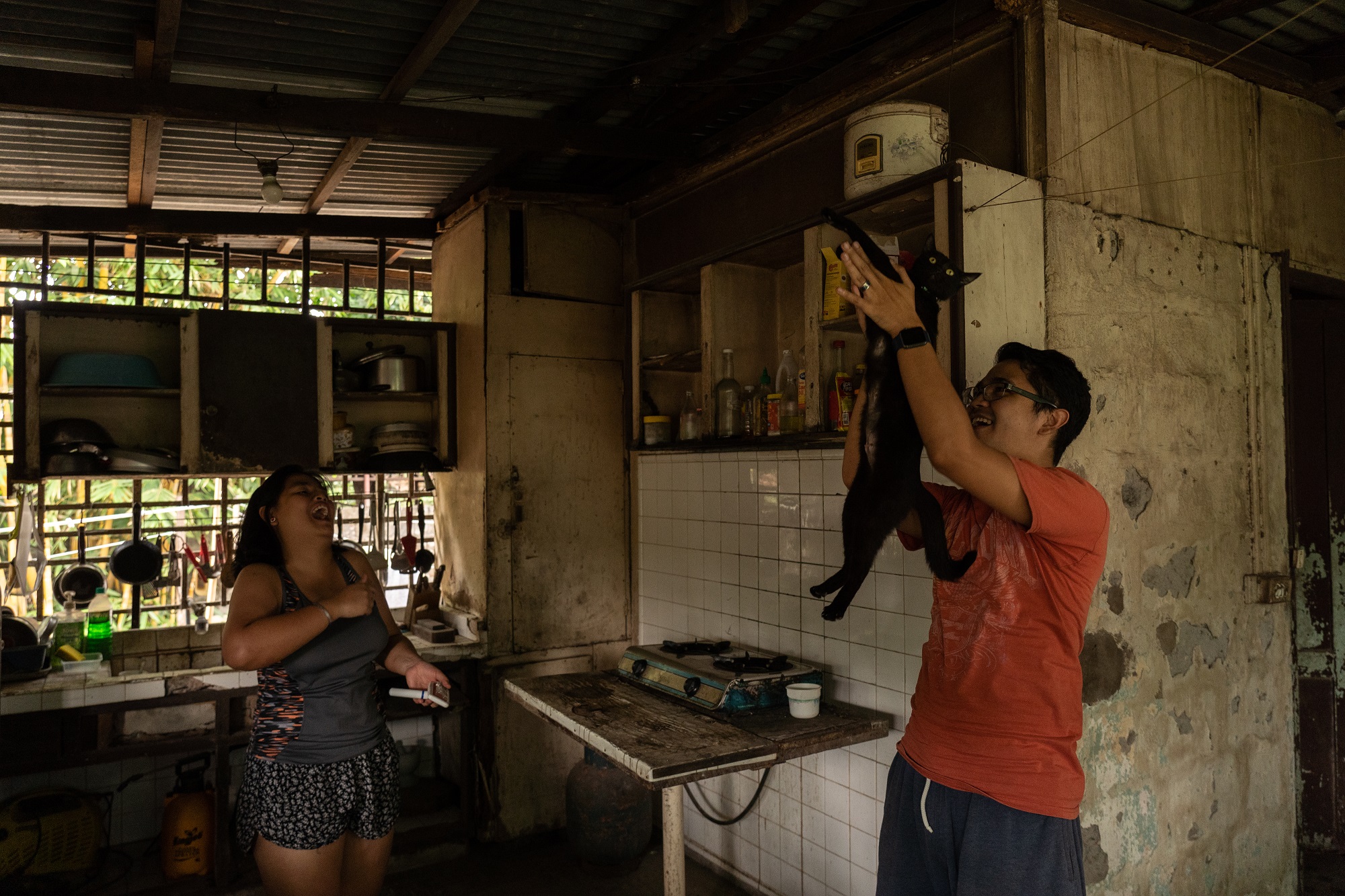 Mano shares a laugh with his sister inside their home. “It took a while for my family to understand my mental health illness,” he says. It took the same time for him to accept his condition. 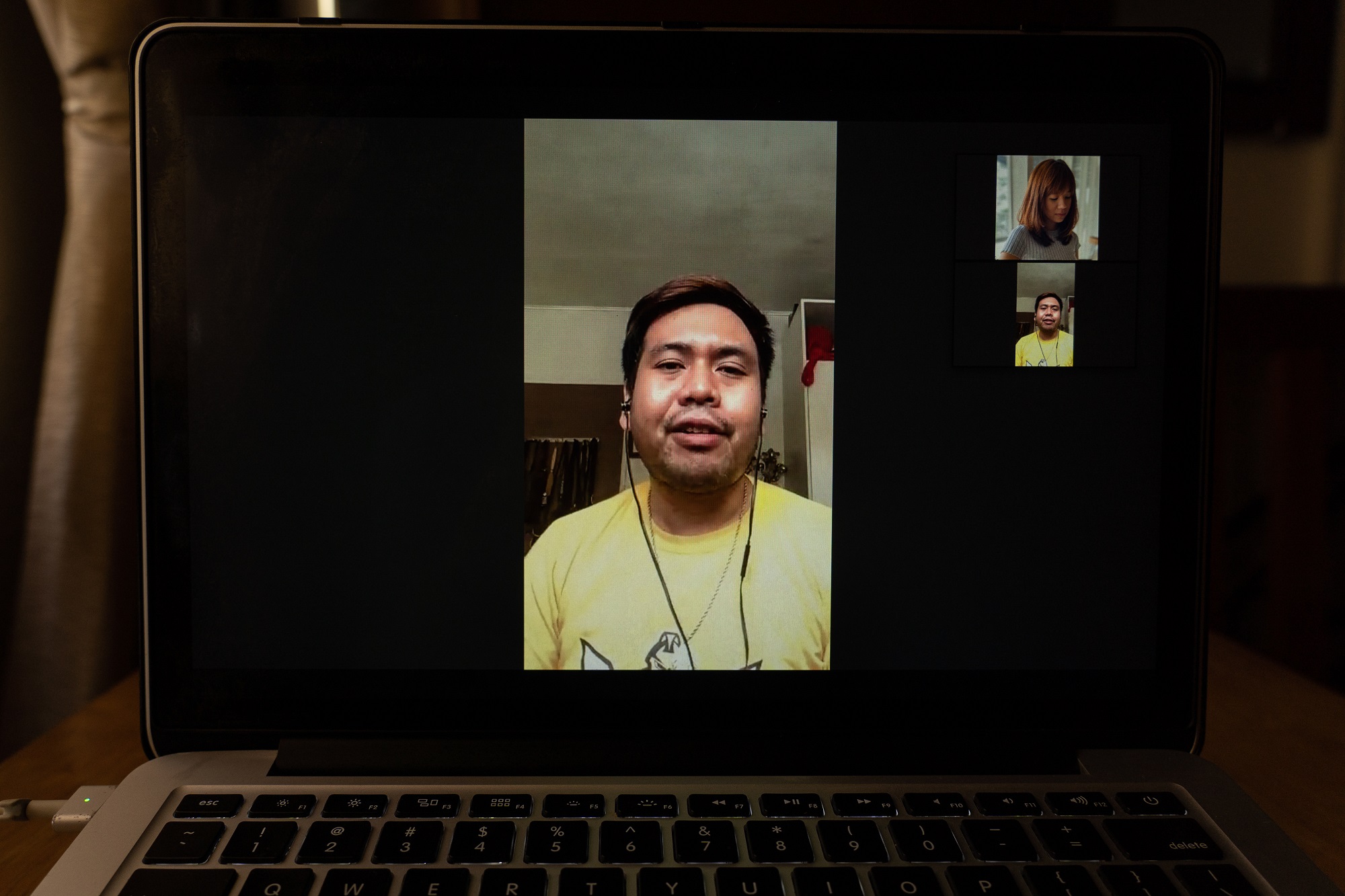 Ryan Baldonado, 30, shares his mental health condition in an online interview. Ryan is in quarantine after experiencing symptoms of Covid-19. 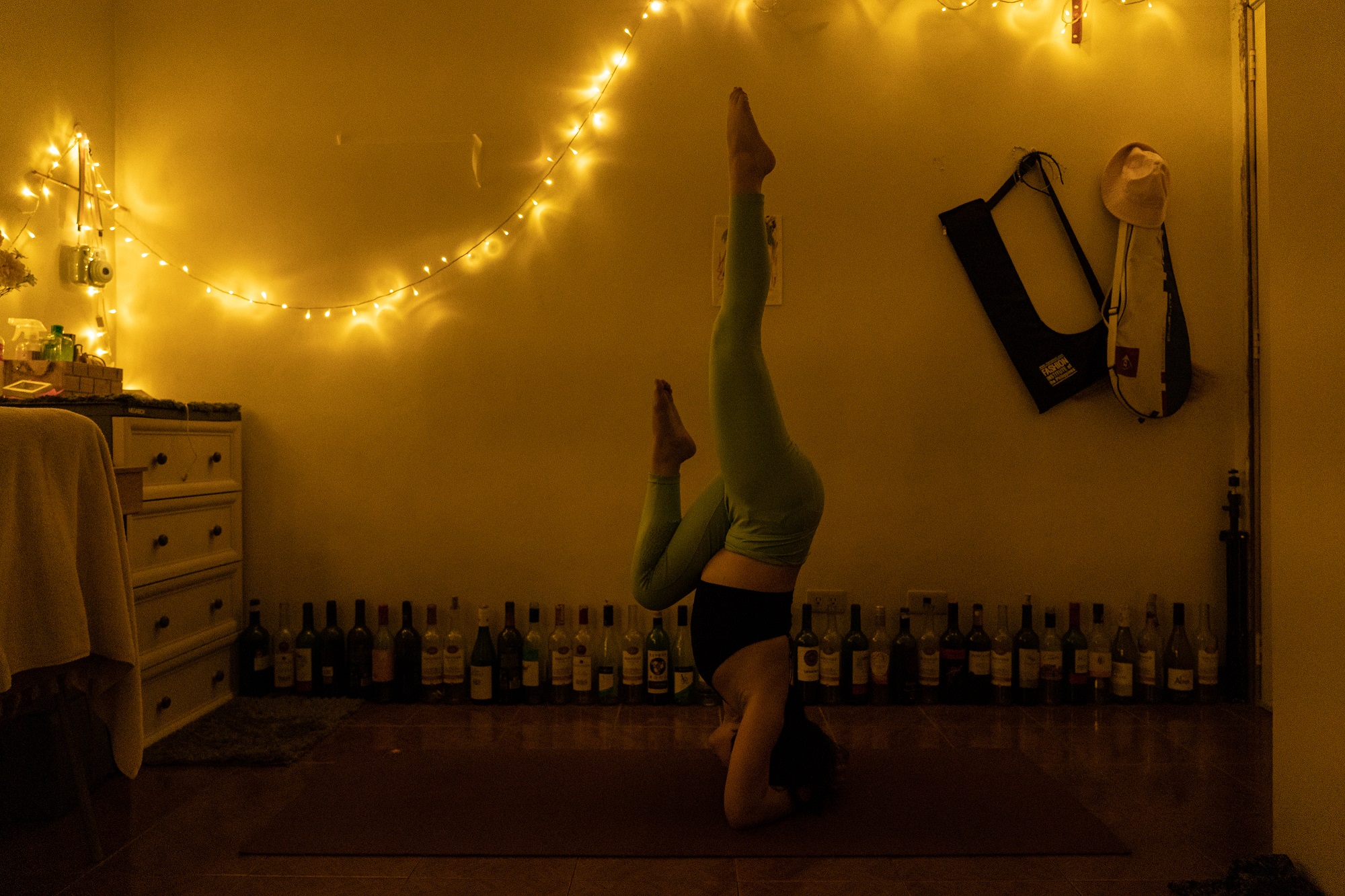 Karla Longjas, 27, does a headstand during meditative yoga inside her room, which is filled with bottles of alcohol. Apart from her medications, she practices yoga to have mental clarity, calmness, and stress relief. 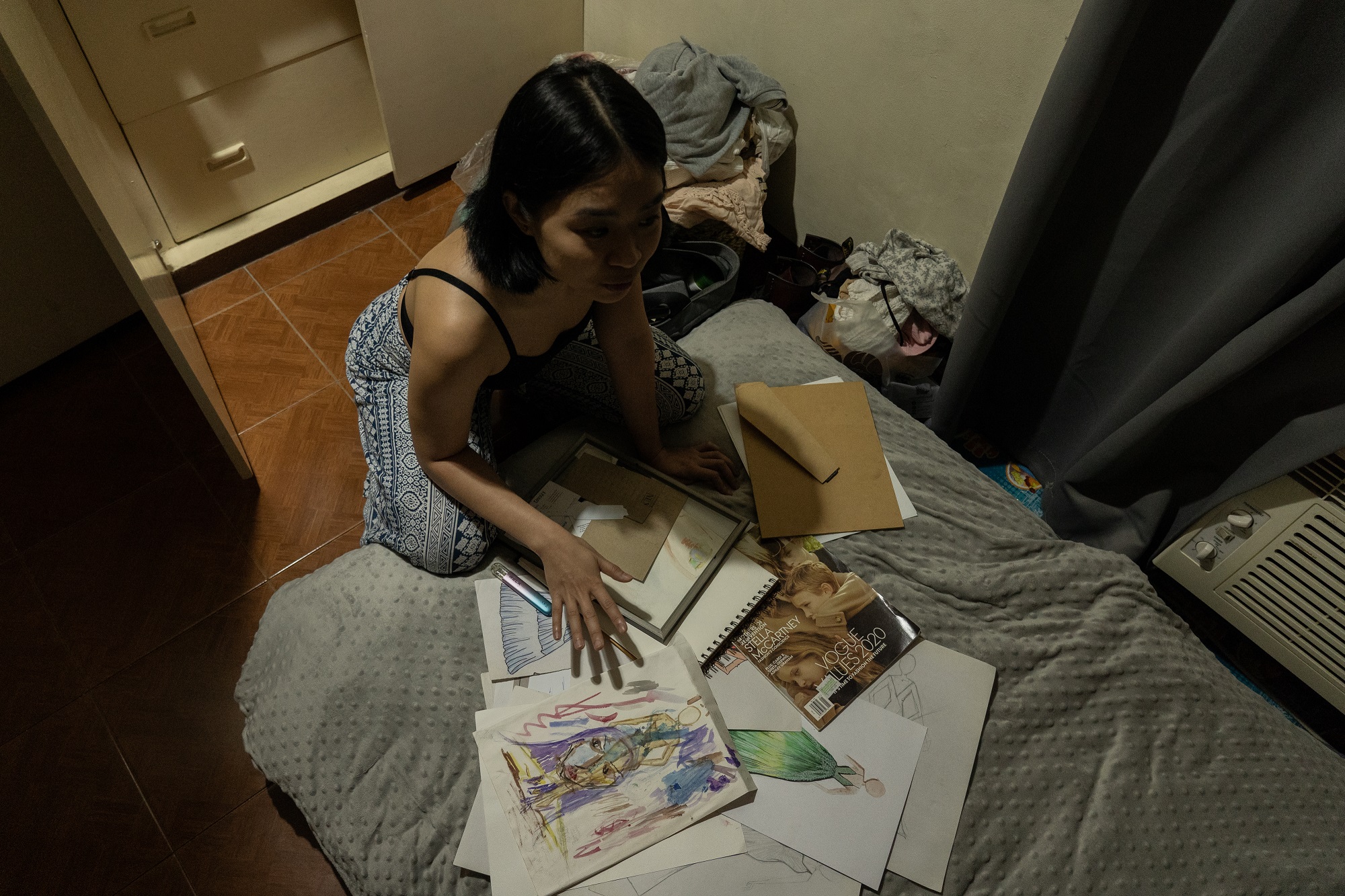 Karla shares that in some days, she has hallucinations and tries to sketch them. 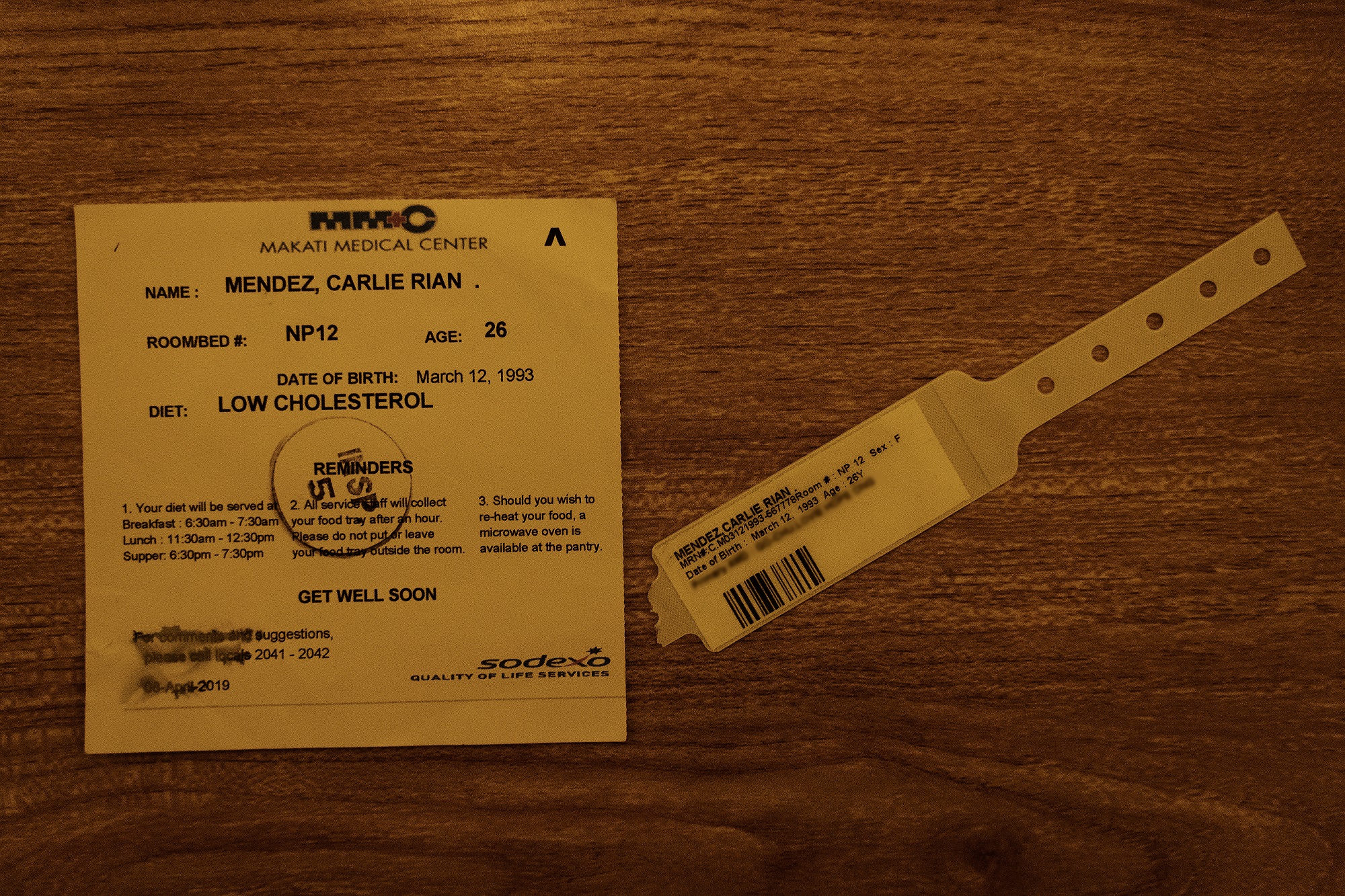 In April 2019, Karla was inflicting harm on herself, leading to her two-week hospitalization as advised by her psychiatrist. In the same year, she was diagnosed with Borderline Personality Disorder.  The stigma around her mental illness made her feel so uncomfortable that she had to use a fake name to hide her identity. 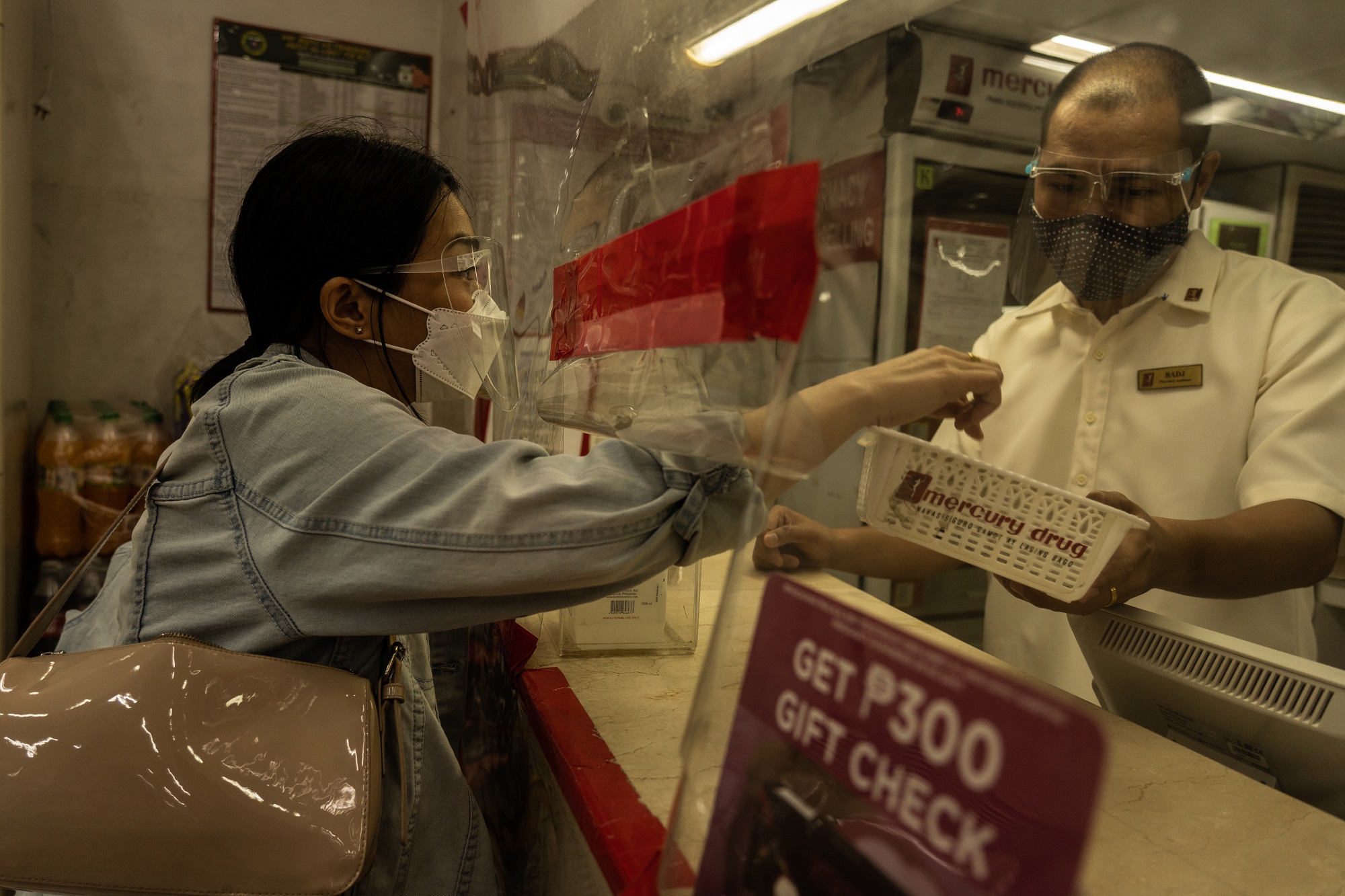 Karla buys her prescriptive medications in a drug store. Individuals clinically diagnosed with a psychosocial disability can avail themselves of the 20% discount for persons with disabilities. 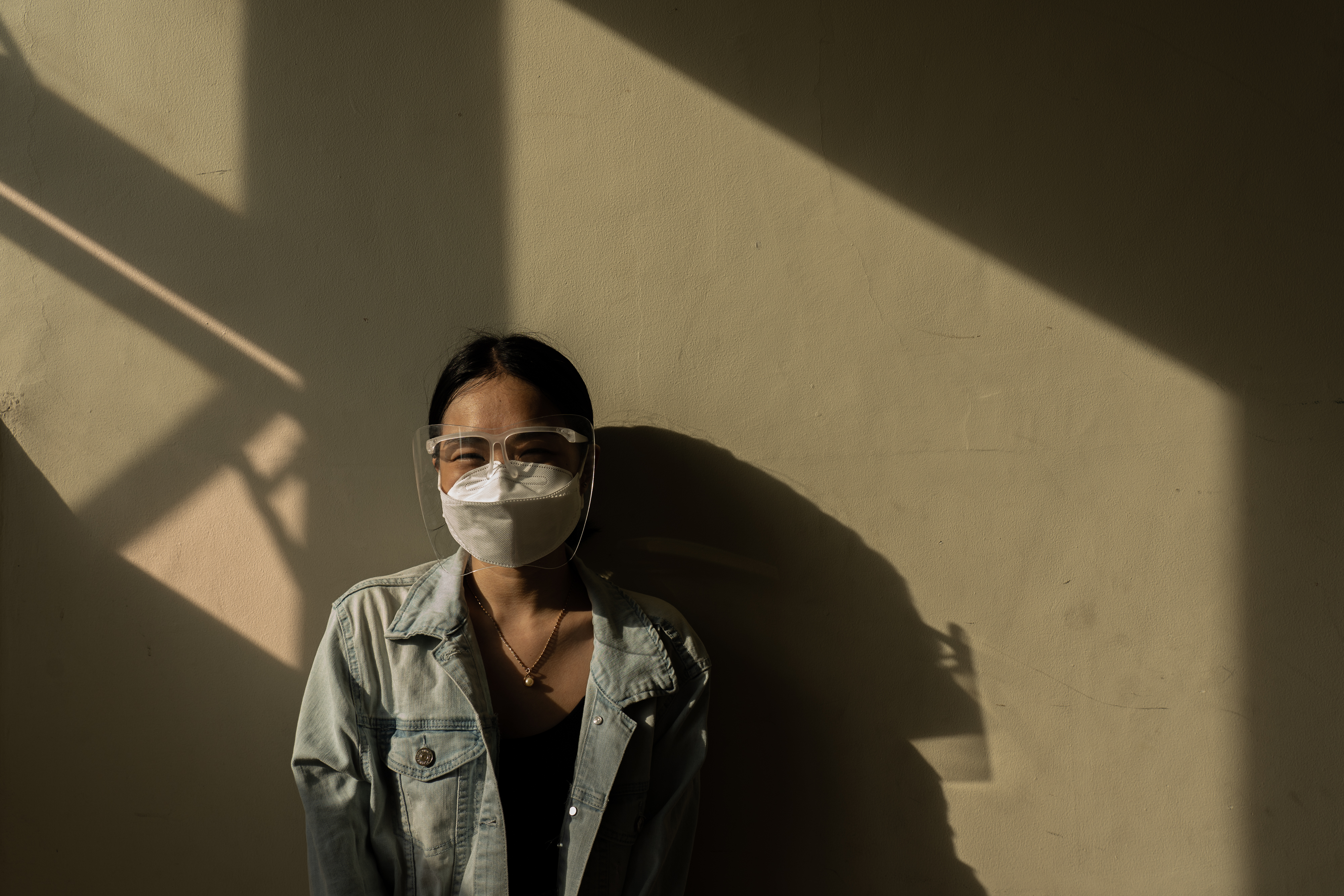 Karla Longjas is photographed at her apartment in Makati. Individuals diagnosed with Borderline Personality Disorder (BPD) exhibit symptoms such as self-harm, unstable relationships, intense anger, and impulsive or self-destructive behavior. BPD is a dissociative disorder that is not commonly diagnosed in the Philippines.

This story is one of the twelve photo essays produced under the Capturing Human Rights fellowship program, a seminar and mentoring project

Check the other photo essays here.