When the transactions in an economy are not heavily based on the money notes, coins or any other physical form of money but are aided by the use of credit cards, debit cards and prepaid payment instruments, such an economy is called cashless economy.

The cashless Economy in India has been amplified with the Indian Government’s initiative of Digital India. This is a flagship programme with a vision to transform India into a digitally empowered society and knowledge economy.

The topic, ‘Cashless Economy’ is important for GS-III Indian Economy of the IAS Exam. This article will talk about it, the types of cash transfer modes, UPI and more.

What is a Cashless Economy?

Cashless Economy can be defined as a situation in which the flow of cash within an economy is non-existent and all transactions must be through electronic channels such as direct debit, credit cards, debit cards, electronic clearing, and payment systems such as Immediate Payment Service (IMPS), National Electronic Funds Transfer (NEFT) and Real-Time Gross Settlement (RTGS) in India.

To know the Difference Between RTGS and NEFT, visit the linked article

Highlights of Cashless Economy in India

There are various cashless payment modes and these are mentioned below:

Mobile wallet: It is basically a virtual wallet available on your mobile phone. You can store cash in your mobile to make online or offline payments. Various service providers offer these wallets via mobile apps, which is to be downloaded on the phone. You can transfer the money into these wallets online using credit/debit card or Net banking. This means that every time you pay a bill or make a purchase online via the wallet, you won’t have to furnish your card details. You can use these to pay bills and make online purchases.

Plastic money: It includes credit, debit and prepaid cards. The latter can be issued by banks or non-banks and it can be physical or virtual. These can be bought and recharged online via Net banking and can be used to make online or point-of-sale (PoS) purchases, even given as gift cards. Cards are used for three primary purposes – for withdrawing money from ATMs, making online payments and swiping for purchases or payments at PoS terminals at merchant outlets like shops, restaurants, fuel pumps etc.

Net banking: It does not involve any wallet and is simply a method of online transfer of funds from one bank account to another bank account, credit card, or a third party. You can do it through a computer or mobile phone. Log in to your bank account on the internet and transfer money via national electronic funds transfer (NEFT), real-time gross settlement (RTGS) or immediate payment service (IMPS), all of which come at a nominal transaction cost.

The cashless economy in India is being promoted through various platforms and applications which provide easy methods of funds transfer and payments:

Read in detail about the Fiscal Policy in India at the linked article.

Advantages of a Cashless Economy in India

Challenges in transitioning to a Cashless society

To understand the Digital Divide in India, candidates can visit the linked article. This will also give them a brief idea of the areas of improvement to make India a cashless economy.

Is India Ready for a cashless economy?

The difficulty in going digital is exemplified by the data on debit card usage — over 85% (in volume) and 94% (in value) of all debit card usage is at ATMs for the purpose of withdrawing cash. The principal purpose for cards in an Indian context is thus a means to withdraw cash. The exponential growth in debit cards (over 600 million) is a direct consequence of the financial inclusion drive that led to the opening of over 170 million bank accounts. Though the move put plastic money into the hands of millions, effectively it has only shifted cash withdrawals from banks to ATMs, which was not quite the intent.

As calls for going cashless grows louder in India, a key challenge being faced at the global level is to check the continuing rise in the total value of the currency in circulation and its share in the overall GDP, a trend particularly seen in the US, Switzerland and Euro area.

Such a continuing rise in the circulation of currencies for economic activities could well be a major impediment in the transformation to a cashless and digital economy.

India’s cash to GDP ratio — an indicator of the amount of cash being used in the economy — is around 12 to 13%, which is much higher than major economies including the US, the UK and Euro area but below that of Japan (about 18%). Cashless Economy in India & The Challenges ahead

Typically in India, a cashless economy may take a bit longer to be adaptable. The challenges with regard to the same have been discussed below:

The panel, headed by former finance secretary Ratan Watal, was constituted in August to suggest ways to encourage India’s movement towards a cashless economy. 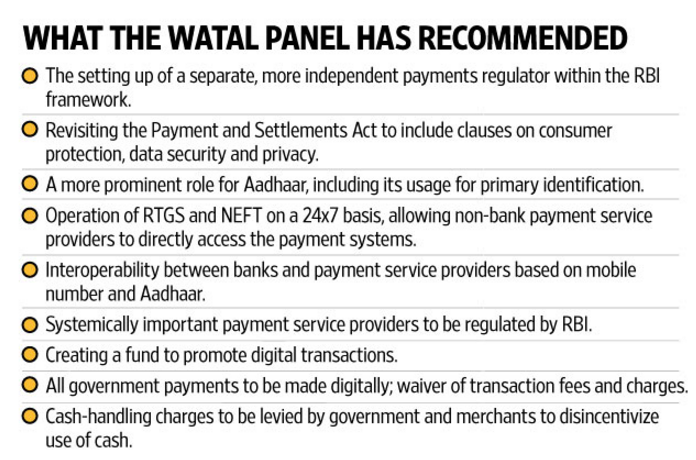 India must learn from other countries in the developing world, which have managed to reduce their dependence on cash even while bringing in more people in the folds of the formal banking system. Kenya has been a well-documented success story, where mobile money has spread much faster and deeper than in India. Kenyan households with access to mobile money were able to manage negative economic shocks (like job loss, death of livestock or problems with harvests) better than those without access to mobile money.

The path forward is clear:

How to Approach the topic ‘Cashless Economy in India’ for UPSC